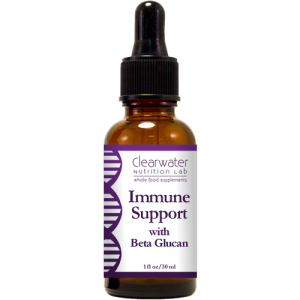 When it comes to naturally boosting the immune system by optimizing it’s response to diseases and infections, beta glucans are crucial weapons in the fight to stay healthy.  Unfortunately, the body doesn’t produce beta glucans naturally, the only way to get them into the body is through outside sources. Clearwater Nutrition Lab uses the most potent sources of Beta Glucans: Mushrooms (shiitake and chaga) and wild oats.

There is over a century and a half of research on beta glucans. Studies have shown that they act as immunomodulator agents, meaning they trigger a cascade of events to help regulate the immune system making it more effective.  Specifically, beta glucans stimulate the activity of macrophages, which are versatile immune cells that ingest and demolish invading pathogens while stimulating other immune cells to attack.  They also release cytokines, chemicals that enable immune cells to communicate with each other.  In addition, beta glucans stimulate lethal white blood cells (lymphocytes) that bind to tumors and viruses, then release chemicals to destroy them.

In a study conducted by the US Department of Agriculture’s Human Nutrition Research Center, both male and female study participants with mildly high cholesterol were put on a diet containing 1 or 10 % beta glucan.  After five weeks, both groups showed a significant reduction of total cholesterol and low density lipoprotein (ldl).  What’s more, total cholesterol levels were significantly lower on the group who received the higher dose of beta glucans.

There is mounting support in studies that beta glucans have anti-tumor properties suppressing the formation and development of tumors.  The studies also show that the beta glucans restore or boost the responsiveness of cytokines which interact with immune cells and regulate the response to disease.  In an earlier Japanese study, mice with tumors that received beta glucans experienced a rapid decrease in the number of tumor cells as well as a notable increase in neutrophils in solid tumors.  Neutrophils are a type of white blood cell that destroys invaders, in this case, cancerous cells.

In addition to beta glucan’s assistance in the fight against cancer, studies show they also help the body battle bacteria that cause upper respiratory infections.  They appear to mitigate the symptoms of the common cold or at last reduce the number of day’s it typically lasts based on a randomized trial in 2009 by the Montana Center for Work Physiology and Exercise Metabolism.  Participants who supplemented with beta glucan had fewer (23%) upper respiratory tract infections compared with the group that used a placebo.  There also were studies that showed supplementing with beta glucans can help with e-coli and staph infections.

While there isn’t a single magic bullet to eliminate disease, a growing amount of research shows that adding beta glucans to your daily routine can play a significant role in helping your body fend off not only the common cold and respiratory infections but more serious diseases including cancer.  Clearwater Nutrition Lab’s beta glucan product is naturally produced using only the highest grade matrix of shiitake, chaga and oat based beta glucans in a compound and delivery system designed for maximum absorption in the body.